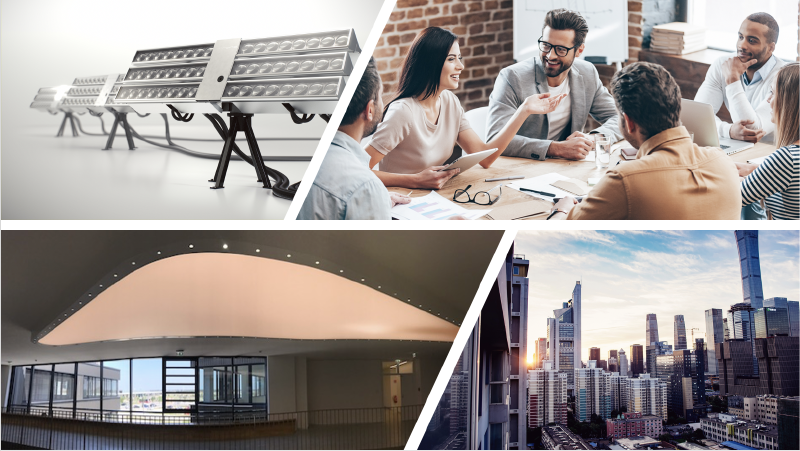 the group – THIRD quarter in summary

In the past quarter, the board of directors discussed, reviewed and approved Parans’ development plans for the next two quarters, that is, on the one hand, focus on the market sales of PLT’s IoT LED street light energy-saving services in the Chinese market; on the other hand, it must significantly reduce PSL’s Operating expenses. At the same time, the company is also developing a new generation of low-cost, compact natural sunlight lighting system products for a wider range of customers. Parans has achieved good results in the above three directions. For the two IoT energy-saving management projects in Zibo City and Jihongtan sub-district, PLT has completed the preliminary road lighting site inspections, the preparation of energy-saving upgrade and replacement plans, energy-saving maintenance comparisons and audits, and the completion of commercial negotiations on contract terms with the government. Now it has reached the final statutory bidding stage. It is expected that the statutory bidding process will be completed during the fourth quarter and an IoT energy management service contract will be signed with the government. The total contract value of the two projects is about 30 million Chinese yuan. In view of the fact that the local government is busy most of the time with wave after wave of epidemics and has encountered the new business model of IoT energy management for the first time, it has caused the signing of the PLT two energy management project contracts to be seriously delayed. In addition, work to reduce PSL operating expenses is also proceeding in an orderly manner. A new generation of low-cost, compact natural sunlight system that PLT is responsible for is also under development. It is expected that the first prototype will be developed by the end of this year. Although our marketing plan has been delayed due to some objective reasons, we still believe that Paras will achieve good results in the Chinese market and Parans will have a very bright future. I hope that all shareholders will continue to support us patiently. Thanks!

comments from the ceo

Parans has continued to invest significant resources in building commercial capacity in China. Today we have a fully developed organization with competencies in all necessary areas. Great focus has been on running and developing the various sales projects within IoT Streetlights. The business model that is focused is called EMC, which stands for Energy Management Contract. This means that instead of selling products for street lighting and receiving a one-time revenue from each transaction, we sign a 10–20-year agreement with the customer where we share, already agreed in advance, savings in the form of reduced energy- and maintenance costs. The profitability of this business model is considerably better, and we ensure a recurring revenue in each EMC business for many years to come.

Since the summer of 2021, the company has been working on several sales projects with EMC as its business model in China. These sales projects have taken significantly longer to contract than predicted. Reasons for delays include complexity in contract design and negotiations and a general inertia in the administration of local authorities / cities caused by the pandemic. The target is that the company shall have completed negotiations and contracted at least two customers before the turn of the year and that one to two major projects shall be contracted during the first quarter of 2022. All with EMC as a business model.

Continued sales of SP4 and development of a consumer version SP5

In addition to the large tunnel customer in the Netherlands, the company delivered SP4 systems to customers in Sweden, the USA and Slovakia during the third quarter.

In connection with the relocation of SP4 production to China, work has also begun to build up a new supplier base in China with the aim of significantly reducing the costs for components in the SP4 system. We consider it necessary to make this cost reduction of the SP4 system to be able to reduce the price to the customer and thereby increase the size of the market as many potential customers perceive the current SP4 as too expensive.

Work is also underway in PLT to develop a low-cost version intended for the consumer market. An SP5 that can be mounted both on the wall façade and on the roof top and that can be purchased through major retailers. The SP5 system will be less advanced, and it will only be delivered in a couple of standard lengths on the fiber cables. Installation shall be possible without a specially trained Parans technician. The price has not been set yet, but the goal is for it to be perceived as attractive and reasonable for the consumer. Initially, the SP5 system will be sold on the Chinese market and later offered to other markets. The goal is for the SP5 system to be ready for first deliveries during the first quarter of 2022.

After the decision was made to move production and development to the subsidiary (PLT) in China and thereby reduce the fixed costs in the Swedish parent company, the implementation of these decisions has begun, and the measures will be fully realized by the end of the first quarter of 2022.

This means, among other things, that the workforce will be reduced, and a minimum of individuals will remain in the parent company. The Swedish company will, however, retain the ability for sales, installation, and customer service. The plan is to rebuild the Swedish organization after we are cash flow positive and then focus on selling all the company's products on the international market.

The company has also outsourced the finance function with the aim of making the finance administration more cost-effective with the opportunity to continuously adapt the resource input to the needs of the business.

In November, the Paran's Board of Directors decided to replace the company's current auditors (KPMG) with the objective to reduce auditing costs. Following the completion of a tender process, the Board decided to hire Moore auditors for the Group's audit. The decision will be finally decided in the next Extraordinary General Meeting.

Re-listing on a new marketplace

The company objective remains to be listed on a marketplace again as soon as possible. We repeat that a basic precondition is that the company can first show a clear upward trend in its commercial development. When this is a fact, a new listing process will start.

In addition, the result is affected by costs of depreciation on patents and trademarks. The asset will generate revenues in the form of royalty and licence fees from the subsidiary PLT in China.

of the subsidiary in China where share capital amounts to 20 322 KSEK. 50% of the share capital has been paid in April 2021, and the remaining amount will be paid in 2024 at the latest.

Cash and bank balances were reduced from year start to 1 853 (9 871) KSEK related to negative cash flow from operating activities. After the end of the third quarter a larger customer payment has been made which has a positive effect on the cash flow.

This report has not been subject to review by the company’s auditors.

Parans continuously publishes financial information four times per year. Next date for information is 25 February 2022 where the YE report will be published.

The Board of Directors 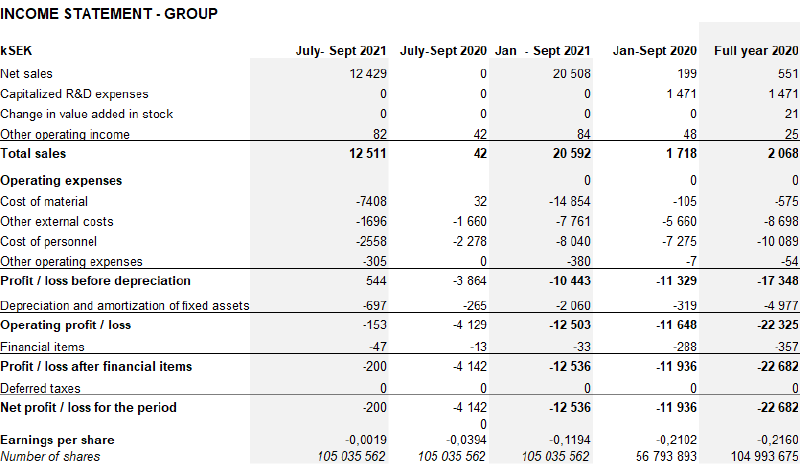 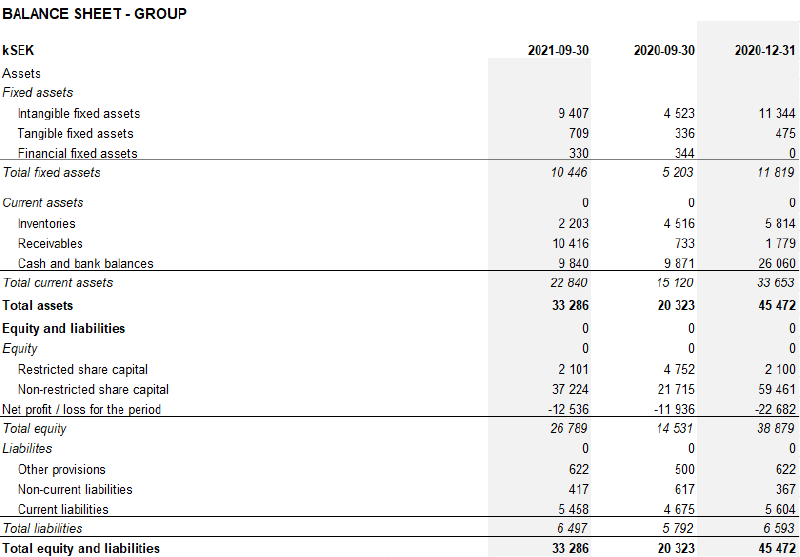 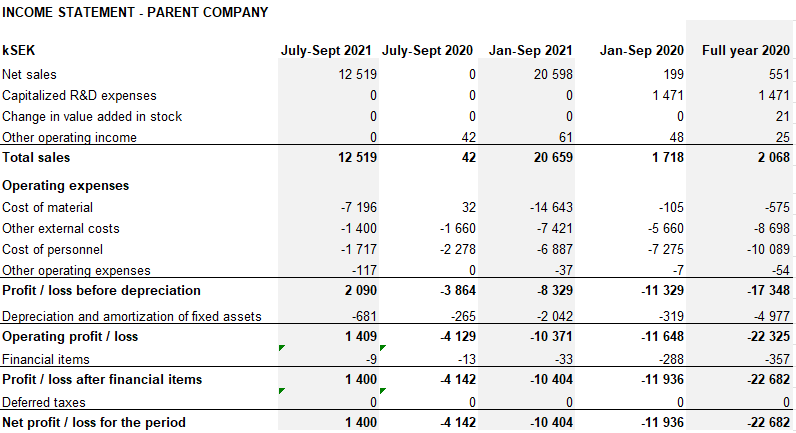 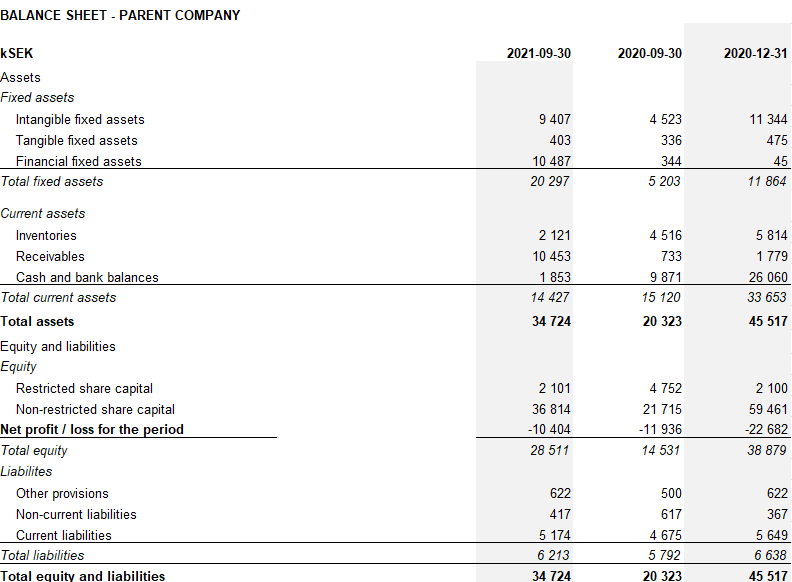